Five hundred years ago there were many variant spellings of Hubberstey. Eventually though thye narrowed dwon to 2, Hubberstey and Hubbersty. The Hubbersteys basically came form the Preston area while the Hubberstys could be traced back to the Yeakland Conyers / Underbarrow area.

From the research that I have done, it appears that the original Hubbersty lines have died out on the male side, which of course makes us wonder why there are still Hubberstys around.

It turns out that, from what I can deduce, all Hubberstys today trace back to one Rose Alice Hubberstey, born in 1873 to Richard Hubberstey and Elizabeth Horn, part of the John Hubberstey/Isabella Weaton line that extends back to Robert Hubberstey and Mary Culcheth. (It appears that Rose was named for her maternal grandmother - Rose's mother, Elizabeth Horn was the daughter of a wealthy miller, Thomas Horn, and his Irish wife Rose.) 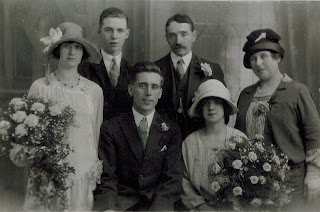 In the above picture, Rose Alice is on the far right, and her son William Patrick is seated in the middle. Also in the photo are Tom McCann (standing, left), Rose Alice's third son, and Margaret Marsh (William Patrick's wife - seated, right), John Marsh (Margaret's father) and Kate Griffiths (Margaret's sister).


It appear that Rose Alice had 2 children before she married Thomas McCann in 1907. Her first son, Ignatius, was born in 1898 and her second son, William Patrick, was born in 1901. She then had two more children with Thomas McCann, Thomas McCann born 1908 and Margaret McCann born 1915. While the original records show Ignatius and William Patrick being registered as Hubberstey somewhere along the line they changed the spelling to Hubbersty. Interestingly, Rose Alice's brother Edward named a daughter Rose Alice in 1910.

It is quite likely that this was accidental as there are more than a few cases of misspelling - even my father looks to have been registered as Hubbersty. However while everyone else looks to have reverted back to Hubberstey, this line from Rose Alice uniformly used and uses Hubbersty.

For privacy reasons I have left out more recent information, however if you are from this line and would like a more detailed family tree let me know and I will send you one.
Posted by GreeneTimes at 7:15 AM