I am a Hubberstey currently living in Canada. My father was born in Bolton, Lancs., as was my grandfather. Farther back our family line traces to the Samlesbury area near Blackburn/Preston. Even farther back it looks like we are descended from Hubbersteys who lived a bit further up the M6, in an area just south of Galgate. And now courtesy of some recent genetic testing (which of course needs to be confirmed by the testing of other Hubbersteys) it is likely that Hubbersteys are actually .... Irish! Yes, the paternal genetic line traces back to a cluster associated with King Niall of the nine hostages in Ireland about 1600 years ago. This cluster is currently concentrated in NW Ireland (where 21% of males carry the line), with smaller clusters in NW England and Scotland.

Over the last two years or so I have spent a fair bit of time researching everything I could find on Hubberstey history. I went through lots of old records on line and then started to work through the census records. I plotted out every Hubberstey/Hubbersty that I could find in all the UK census records from 1841, 1851, 1861, 1871, 1881, 1891, 1901 and 1911 and then looked for connections and tried to trace all of the links. It has been a bit like doing a massive jigsaw puzzle as I tried to fit hundreds of pieces together to get a big picture of our common background. There are still many pieces missing, but overall I think we have a very good picture of where we have come from. You can see what the project did to the walls of my office in the pictures below - though that as some time ago. Everything has now been entered into a family tree program so I can easily put a personal family tree together for you. 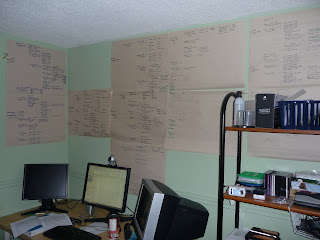 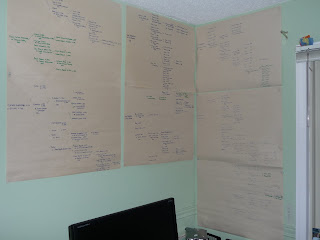 I originally posted my findings as I found them, which made things a bit disorganized. This version of the blog will present the findings in a hopefully clearer fashion. I have left the original blog in place so the old homepage and the old posts, can he accessed HERE (but please be aware that these pages may very well be out of date. I have not updated them or corrected them in some time).

Back in the 1500's and 1600's there were several clusters of Hubbersteys found around Kendal, Lancaster, Garstang, and Yealand Conyers, as well as a few entries elsewhere (London). Over those years there were many spelling variations ranging from Hubberstey to Hubberstei to Huberche. Eventually however it looks as if the spelling "Hubberstey" was used primarily by the lines that were Catholics and "Hubbersty" primarily by the lines that were Protestants (although there is no hard and fast rule for this). There were a few well known Quakers as well, including 2 Hubberstys who were part of the original "Valiant 60".

If we fast forward to today though we find that almost all of these many lines have died out on the male side. In fact after tracing every Hubberstey/Hubbersty that I could find I am pretty confident that if you have the Hubberstey or Hubbersty surname you come from one of only 2 ancestral lines traceable back to the Preston/Samlesbury area.When you go through the records and see how many different Hubbersteys there once were it is astounding to think that almost none of the lines survived on the male side. I think that is probably the most amazing thing that I have discovered in my research.

I should note that although "Hubbersty" was originally the spelling used by the two Protestant lines of Hubberstey, those lines eventually died out on the male side. All "Hubbersty"s today appear to descend from one Rose Alice Hubberstey (from the Robert Hubberstey/Mary Culcheth line), who around 1900 had two male children before she married. These children took the "Hubbersty" surname, and all "Hubbersty"s are descended from them. I should also note that this is NOT the only time that a female Hubberstey has helped carry on the Hubberstey name (though in the other cases they did not change the spelling!).

So whether you are a Hubbersty or a Hubberstey there should be something here for you. Below is a list of posts that detail the history of our name. Many of the posts also have a series of sub posts that track various descendants. The other posts look at lines that have ended or explore other Hubberstey connections or stories.

New Tool: To make things easier to trace your relatives I have indexed all the Hubbersteys on the 1911 census to the appropriate reference pages that are listed below. Just follow this link.

2. Origins (1200-1600). A look at the areas between Garstang and Kendal where the name Hubberstey appears to have originated.

3. Robert Hubberstey and Mary Cucheth (Line 1.) Robert is our oldest directly traceable Hubberstey relation (to today). He married Mary Culcheth in the very early 1700's, and his descendants account for most Hubbersteys today.

4 (e) John, Edmund, Richard, and Catherine The other 4 children of Robert Hubberstey and Mary Watson

5. John son of Robert and Mary (line 1B). John and Elizabeth had 5 and possibly 9 children.

6. The Bamber connection - the other Hubberstey line (line 2). John Hubberstey married Alice Bamber in 1828. Their descendants make up the rest of the Hubbersteys not descended from Robert and Mary above.

6 (a) James Hubberstey and Margaret Bamber (Line 2a)

6 (b) John Hubberstey and Alice Bamber (Line 2b)

8. The current "Hubbersty" line. How a Hubberstey lady restarted a Hubbersty line.

9. Hubbersteys in foreign lands (Canada, USA, NZ, Australia, South Africa, and Ireland). The story of Hubbersteys in other lands, far away from Preston.

9(b) Links to Canada

12.  A few thoughts on my process and what remains outstanding

I have already received invaluable information from several people and I would love to hear from anyone that may have additional information to share.  I'd be especially interested in any information on female sides of the family (as these are much harder for me to track).

If anyone has some old photographs (scanned) that they would like to share I would love to add them to the site. Recently I received some photos from a gentleman whose grandmother was a Hubberstey. Somehow he had ended up with photos of Hubbersteys going back to the early 1900's. By passing on these photos he was able to show current Hubbersteys who he has never met, and who did not have copies of the photos, what their great great great grandparents looked like. I think it would be wonderful if this site could be used as a sort of repository of old photos (say pre-WWII) of Hubbersteys/Hubberstys.

Also if anyone lives in Preston or Kendal and would like to help me out a bit with looking at records please let me know ... It is a bit tough for me to get to the Records office from this side of the Atlantic!

Also, if you don't know where to start, or get caught up in the detail, send me an e-mail and I will try to point you in the right direction - for privacy reasons I have tried to leave out most of the current information so it initially might be hard to figure out where you fit    in. I can also e-mail you a personalised family tree from the records that I have.

My e-mail is chrishubberstey@gmail.com
Posted by GreeneTimes at 9:39 AM No comments: