At various times in the distant past we have had isolated clusters of records of Hubberstys in the London area. By the 1901 census however, these had all but disappeared. We do however have one story that links from Kendal to Cambridge to London and then back up north.

The story starts in the Underbarrow/Fallen Yew area near Kendal with the following tidbit here.

The Hubberstys were prominent residents of Heversham and Kendal. Zachariah Hubberstey married Agnes Parke in 1685. The Hubbersty family sent several sons to be scholars at the Queens College Oxford who went on to become lawyers and recorders in Cumberland and Westmoreland. Two memorials to the later 18th-century Hubberstys stand in Holy Trinity Church, Kendal

This family also had a habit of naming its male children Zachariah or Robert, and its female children Elizabeth. So if you run across a Zachariah Hubbersty in your research, it is probably from this line. The evidence that I could find this far back has so far been limited, with one rather significant exception: If anyone who reads this happens to be in Kendal one day and has a bit of spare time to visit the archives, file WDX 744 looks interesting, to say the least. I would love to see a copy of the family tree!

Without the family tree the best I can do is to surmise that Zachariah and Agnes had at least 2 children, Robert (b. July 9, 1696) and Elizabeth (b. Mar 23, 1686). It appears that Elizabeth is the one who married John Philipson that I mentioned in the previous post on Hubbersty Head.

The location in Underbarrow is also of interest given that the area contains some of the earliest mentions of Hubberstey. Later on we have that Robert Hubbersty contributed to the building of the chapel mentioned below.

Underbarrow hath its name from its situation under the barrow, hill, or scar, which extends from north to south all along in this division. That part which is called Bradley Field received its denomination from a family of the name of Bradley, which came from Bradley in Lancashire. There was an ancient chapel at this place [Underbarrow]. In the year 1708, this chapel was rebuilt at the expence of the inhabitants of Underbarrow only (for Bradley Field is not in the chapelry). "

and the Westmoreland Hearth Tax survey of 1674 noted a Miles Hubaste and a Robert Hubaste in Underbarrow. The spelling may be different, but the sound is quite close to present day pronunciation.

After Zachariah and Agnes Parke, the next mention is of a Robert marrying Anne Knipe. It could very well be that Robert was the son of Zachariah. In any case Robert and Anne look to have had a number of children that are mentioned in Elizabeth's will. (This is not certain as the wording of the will, with three separate lines for nephews and nieces makes one suspect that there was perhaps another Hubbersty family in Underbarrow involved - maybe with Zachary and John being the children of another brother of Elizabeth, other than Robert).

From here the line follows a path with Zachary. We know that John married and had 6 children (2 died in infancy) in Sussex, but I have been unable to find any mention of them elsewhere. There are very few mentions of Robert.

Zachary (b. 1726, d. 1780), an attorney in Fallen Yew, married Phyllis Lodge of Barnbard castle, Durham. They had 6 children, one being John Lodge Hubberstey (b. 1760) who we meet again in the Cambridge Post, and another being Zachary (b.1758), whose line is the only one that I have been able to follow. A point of confusion is that there was also another Zachary born in Kendal in 1760, the son of Robert and Elizabeth (perhaps Robert above). Robert and Elizabeth also have a daughter "Anne" (b.1764), lending more credence to the idea of this Robert being Zachary's brother.

The picture to the left is inscribed as follows:

Sacred memory of Zachary Hubbersty  of Great Winchester Street, London, Esquire, who died on the 23rd September 1797, in the 41st years. of his age, leaving a disconsolate widow and six children. Few equalled and none excelled him in professional knowledge, and strict integrity; and of whom the learned and virtuous Lord Eldon in a letter of condolence to the deceased's brother observed, " His loss is not more to be lamented by his family than by the profession, of which he was an ornament, and an honour." Also of Phillis Sarah Hubbersty his second daughter who in the following years. lost her life by falling into the sea from the pier in Whitby harbour. This monument is erected by John Lodge Hubbersty, Esqre. Senior Fellow of Queen's College, Deputy High Steward of the University of Cambridge, and Recorder of Lancaster, who has never ceased to lament the loss of the best of brothers and friends. 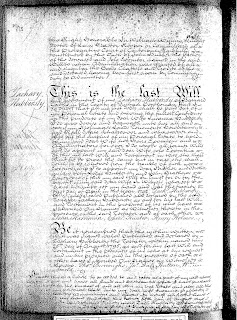 This leads us to Zachary's widow and 5 surviving children in London after Zachary's death (last will and testament to the left - click on it to get a bigger version). There is a marriage of a Zachary Hubbersty to an Isabella Curties in 1814 and in 1815 we do have a Robert Curtiess Hubbersty born in London (b. Dec 12, 1815) and a Phyllis F or (J). Hubbersty born 1817 also in London. With both Zachary and Phyllis being relatively rare Hubbersty names, it appears likely that Zachary was one of the surviving children of Zachary above.

Zachary does seem to have had some financial problems as outlined in the London Gazette from 1845.

WHEREAS a Petition of Zachary Hubbersty, late of No. 65, Exmouth-street, Clerkenwell, in the county of Middlesex, Managing Clerk, and a Prisoner for Debt in the Debtors' Prison for London and Middlesex, at White Cross-street, in the city of London, an insolvent debtor, having been filed in the Court of Bankruptcy, and the interim order for protection from process having been given to the said Zachary .Hubbersty,.....

Robert Stephen was listed as a medical practitioner in the 1891 census, living in South Bishop Weamouth, Sunderland. He married Florence Brady(b.1864, d.1952) in 1897. They appear to have had 2 children, Catherine Paley (b. 1900) and Francis Stephen (b. 1903, d. Feb. 1991). The births were registered in Sunderland. Catherine Paley married John Edward Bowring in 1927. Francis Stephen Hubbersty is later referred to as a surgeon in Middlesborough. There was an article published in the British Journal of Opthamology in 1959 by a F.S. Hubbersty. Robert Stephen Hubbersty's obituary from 1939 can be read at the British Medical Journal, part of which is excerpted below.

Dr. ROBERT STEPHEN HUBBERSTY, who died on June 13, had been a member of the Sunderland Division of the British Medical Association for fifty-four years. He was born at Cartmel, Lancs, in December,. 1861, the son of the Rev. R. C. Hubbersty, and was a direct descendant of the Rev. William Paley, D.D. (1743-1805), Archdeacon of Carlisle and author of the Evidences of Christianity,

John Paley Hubbersty also married in 1897, to Mable Emma Boulton. By 1901 they had one daughter, Phyllis Margaret. (b.1898). Subsequent to the census they appear to have had another son Robert Paley in 1902. The births were registered in Leeds. The BMD records show the death of a John P. Hubbersty aged 72 in 1930 at Warfdale and Robert P. Hubberstey in 1937.

So on the male side at least this line ends with the death of Francis Stephen Hubbersty in 1991.

This one is quite confusing but fun.

We start with finding a John Hubbersty Mathews of 142 Hargate having died in 1886, links here and here, leaving a widow Marianne.

To make things interesting John Hubberstey Mathews (b. 1796) seems to have been the son of John Mathews (b. 1745, d, 1833) and his second wife Joan Anne Wright (b. 1760, 1848). Now if you are asking where did the Hubbersty in the name come from (after all neither of his parents was a Hubbersty), you are asking a good question.

The answer is that there was a Zachary Hubbersty (b.1759, d.1799) who married a Susan Mathews (b1754, d. 1838). More here. Susan was the sister of John Mathews (who married Joan Anne Wright). So it looks like the Hubberstey was added as a middle name for some family reason. The whole family tree is here.

And so we end with finding out that John Hubbersty Mathews was not a Hubbersty! Interestingly he did write a piece called "A treatise on the doctrine of presumption and presumptive evidence, as affecting the title to real and personal property (1827)"

If I find more I will add them later.
Posted by GreeneTimes at 6:47 AM

Robert Hubbersty was my mother's family doctor and Catherine was my godmother.

I have a dinner jacket with the label Dr F S Hubbersty 1959 in the pocket! I have often wondered about the original owner of this beautiful jacket!

I have owned a beautiful dinner jacket with the name Dr FS Hubbersty 1959 in the pocket for some time and have often wondered about the original owner!

Thanks very much to both of the above for your comments. This is really a branch of the Hubbersty family I know very little about other than what I have been able to find on-line in various places.

Catherine Hubbersty had an earlier son, Stuart, born 1883 at Rochester, who followed his father into Holy Orders and in 1911 was serving in Bristol.