There is a wonderful book, "A history of Blackburn, town and parish (1877)" that thankfully gives us a valuable starting point for our story (the entire book can be read at the above link). There is plenty of information on the lives of Robert Hubberstey and Mary Culcheth and their children. Until (if) we can go back further, when most Hubbersteys think about their earliest traceable ancestor, they are thinking about Robert and Mary.

We start with Culcheth story:

Followed by Robert and Mary:


HUBBERSTEY OF SOWERBUTTS GREEN.
Robert Hubberstey, yeoman, by his wife Mary, daughter of Hector Culcheth, had issue, sons, William ; John (who had issue, by his wife Elizabeth, Robert, James, John, Mary, and Joane); and James ; and daughters, Dorothy, Ann, and Elizabeth. Robert Hubberstey acquired, as stated above, the estate on Sowerbutts Green ; and he died Oct. loth, 1727, and was buried at Brindle Catholic Chapel. By his Will, dated Jan. 2Oth, 1727, testator gives each of his six children 20 a piece on attaining the age of 21 years; the residue of his goods to his wife Mary. Will proved at , March 2Oth, 1727-8. Mary Hubberstey, widow of Robert, died in extreme old age, Nov. 22nd, 1766.

The one point of contention is that the book has Robert being buried at Brindle, but other records show Robert buried in Garstang.

Sa(o)rbrose House is pictured below, along with a sketch of the area from 1820: 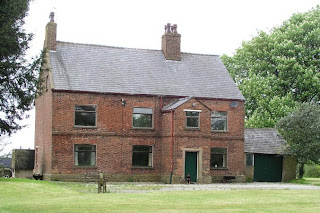 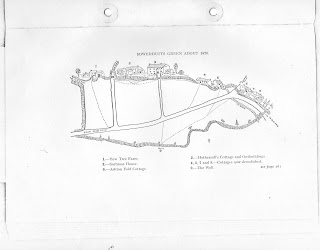 Children of Robert and Mary:

"A history of Blackburn" also offers us information on the children of Robert and Mary. This will serve as the foundation for the next two posts looking at the descendants of two of the sons, William and John. Unfortunately I have not been able to find any information on the third son, James. This remains one open possibility that could link all of today's Hubbersteys together (if the other remaining line were to connect through James).

Robert Hubberstey, yeoman, son of William, married, in 1 767, Mary, daughter of William Watson of . He had sons, William ; John ; Robert, married Cicely Fazackerley; Thomas, James, Edward and Richard; and a daughter Catherine. Robert Hubberstey sold an estate he had in Brindle (Denham Hall estate), in 1776, to William Morris of Up-Holland, gent., for ^"584. He had on lease the estate of Over Brockholes. By his Will, dated Jan. 7th, 1794, Robert Hubberstey gives his estate at Sarbrose Green, Samlesbury, to his son William, subject to an annuity to testator's wife Mary ; and the lease of Haydock's tenement, held under Edward Lord Petre, to
his son John ; to his younger children, each 200. Robert Hubberstey died June 8th, 1794.
William Hubberstey, yeoman, son of Robert, sold his estate in Samlesbury, in 1818, to Henry Sudell, Esq., for ^,'4000 ; but Mr. Sudell became a bankrupt in 1827, before the purchase money had been paid, and so the estate came back to Mr. Hubberstey. He married Deborah Whittle, by whom he had two sons and a daughter. He died Jan. 2Oth, 1838.

Robert Hubberstey, gent. , son of William, now owns the estate, to which he has made additions, and resides at Sowerbutts Green. He is unmarried. His lands in Samlesbury are returned as 106%, statute acres, with a rental of ^170 per annum

I did recently come across a death record for a John Hubberstey (buried July 31, 1802 - at St. John's Preston) that was born in 1715 and therefore 87 at the time of his death. It is quite conceivable that this could have been John, son of Robert and Mary.


When I go back in the records for the early to late 1700's there is evidence of more than the Hubbersteys descended from Robert and Mary in the Preston/Brindle/Samlesbury/Garstang area. So far though I have not had any luck trying to tie them in to the Robert and Mary line. The two possibilities are a) that they are descended from the third son - James or b) they come from different lines out of the Garstang area. The reason this is interesting is that if they come from James then we would probably be able to tie all Hubbersteys today to Robert and Mary. Ultimately it may take some genetic testing of the two lines (once it is cheap enough to know for sure), though of course genetic testing typically shows that for 20% of people their parents are not who they think they are!

So for now we will start with:

1. The children of William (and Mary Eccles) - Robert, Elizabeth, Mary and Dorothy

Here is the information in graphical form - click to get a larger image.

Update (Jan 15, 2018): Thanks to Phil's notes below it does look like we have more information on James, son of Robert Hubberstey and Mary (Culcheth).

It looks like James was born in 1722 and married Alice. Then then went on to have at least 9 children. The next step is to see if we can tie some of the later information back to this family.

One of the most obvious connections on a quick look is the marriages for three of the children at St. John, Preston in quick succession.
William married Margaret Rigby Jan 2 1784
Henry married Mary Charnock Nov 7, 1785
Thomas married Ellen Pemberton May 14, 1786
Posted by GreeneTimes at 5:22 PM

Hello. Is it possible that James Hubberstey residing in Broughton at the time of the Returns of Papists 1767 is the son of Robert and Mary? This James was born ca. 1722 according to the age given on the returns, and with his wife Alice had the following children, listed in order of birth: Robert, Jane, Mary, James, Ann, William, John, Henry, and Thomas.

Quite possible, especially considering the naming of the children. I have not had a chance to go through the Return of Papists 1767. It certainly looks like it could have some valuable info. This could be the missing link to tying in all the Hubbersteys.

Thank you very much for the info. I will work on seeing how it ties in with other info I have.

Returns of Papists 1767 is one of my primary sources for researching Lancashire Catholic families. Here are the full details of the James Hubberstey entry:

A List of the Papists in the Township of Broughton within the Parish of Preston...

Excellent! I had stopped working on this a ways back as I had run out of new material to add. It looks like you have added that new material! and now given me some more "work" to do. I think there is a good chance to tie more of the Hubbersteys together here. I just ordered a copy of the Return of the Papists today, so that I can do a bit more digging as well. Thanks very much!