As we noted in the last post John and Alice had 5 children. There is a lot of information for the last 2 children (William and James), so it does get a bit complicated.
For the previous post on the Bambers/Hubberstey relationship - see Here.

I had originally not been able to trace the family in the 1851 census and based on a death record had thought that Alice had died in 1847.  However thanks to a reader of this blog, who was doing research on a different family, we now know that in 1851 widowed Alice was living with her sister Elizabeth (who had married a Richard Walmsley) along with children James, William and Alice at 88 Moor Lane in Preston. (It turns out that the census transcribers had written Hubberstey as Hubberstoy)
Alice b.1837: Alice married James Lamb in 1860. By 1871 they had a son William (b. 1867) and were living in Bury in a caravan. James Lamb was described as a travelling photographer. Also in the fairgrounds caravan area were another photographer family, a clown and his family, and a travelling confectioner. By the 1881 census they were living in Preston (Northcote Road), but there were no children listed. In the 1901 census Alice Lamb is living with John, the son of her brother James (see below)!

Mary b.1831: I have not been able to find any information on Mary.

From some posts on Ancestry.co.uk we also have additional information on this family. Margery died of the flu in 1919 and John died at Ypres in 1914. Dorothy married a James Hynes and had 2 children (John and Peter). William Edward married Theresa Catherine McManus in 1924 but they did not have children. Robert died in the 1970's with no children and James married Violet Cocker and together had three children (John, Paul, and Jane). The children of James all married, with John and his wife having 2 children and Paul and his wife having 3.


At the time of the 1901 census William was age 66 and described as a master builder. John and Jane Ellen's family lived at 2 Lombard Terrace, Garstang Road. 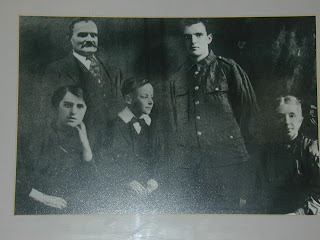 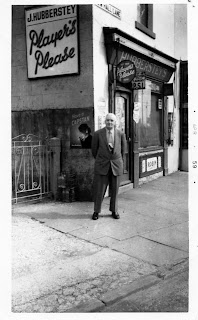 From the records I have been able to find it appears that Elizabeth Ellen married George Naylor and that John (pictured at left in front of the "Hubberstey's" shop in Preston) may have married Sarah Hindle in 1917. He emigrated to Canada (Montreal) along with his sister Alice. 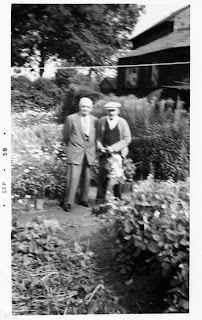 Ignatius: Ignatius married Susannah McNamara in 1895 and by the 1901 census they had a son Thomas b.1897. I have not been able to find a marriage for Thomas, however he is one of very few candidates to be the William Hubberstey (born around 1895) that married on the Scilly islands around 1918 (maybe he was Thomas William) and had two sons Rodney and Frederick.William: William married Ann Shuttleworth in 1881. By the time of the 1901 census was an agent for the Burial Society and Ann was a hosiery manufacturer. They lived at 144 Elliot Street, Preston and had 7 children listed on the census - Theresa b. 1883, Mary b.1885, Joseph b.1887, Ann b.1890, Aloysius b.1893, Rose L. b.1896, and William b.1900. WilliamWilliam's father James was also living with them.

Son Thomas also emigrated to the US, not knowing where his father was living, but eventually was able to locate him.  Thomas married first Minnie Cooper and had two sons, Robert T. (b.1929, d.2003) and James G.(b.1927, d.1974), and then Genevieve Jordan (b.1916, d.2000). He later married Vinette Alden and there was an adopted son William. (There is more on this family on the foreign lands page Link .)

NOTE: I know this post is a bit confusing, so if you are part of this line and would like a printout of the relationships just send me an e-mail.


To return to the home page - Link.

Posted by GreeneTimes at 5:22 PM

I am Peter Hynes the remaining son of Dorothy (Peg) Hubberstey who married James Hynes.I have the calling card purse of my mother's sister Margery, which still contains some of the original visiting cards.The name on the card is Margery Hubberstey. My mother always refered to her sister as Marty, as did my Uncle Jim and Uncle Bob.The address on the card states the address as 4 Lombard Terrace Preston.I hope this information is of interest. I also have numerous photos of the Hubbersteys

I'd love to see any photos that you could send my way - I don't really have any of your part of the line.

Interesting about the address (4 vs. 2 Lombard Terrace). Did they live next door, or was the census number wrong? I assume Lombard Terrace no longer exists (can't find it on Google earth), do you know what part of town it was in?

ingraHi Chris. Peter is quite right about the name Marty. Lombard Terrace is not a street but a terrace of houses on Garstang Road Preston more or less opposite English Martyrs church