Robert looks to have been the second son of Robert Hubberstey and Mary Watson. He was born about 1774 (d.1839, aged 65). He married Cicely Fazackerly (b.Dec 3, 1784, d. 1864) on July 7, 1805 at St. James, Brindle. Robert and Cicely appear to have quite a few children, but unfortunately many died in infancy. For example, the baptismal records from Ribchester (from 1805-1816) show 3 children being bapitized Robert and 2 being baptized William, with the William that did survive being born even later still. The records show the earlier children being baptized in Ribchester (born in Osbaldeston) with the later children being born in Brindle, indicating that the family moved around 1818 or so. 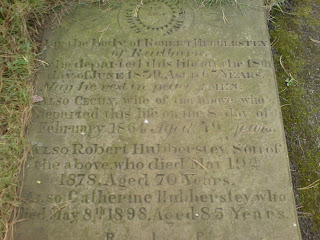 
Shortly before the date of the Prior's letter, and in his absence from Ampleforth, Br Cyprian approached one of the maidservants, and declaring that he had had enough of Ampleforth and intended to leave that same night proposed that she should elope with him. His proposal was met with a flat refusal and he then told that subprior what he had done, expressing the greatest regret promising to do whatever the subprior should advice, and adding that he must have been out of his mind to act so foolishly. The Subprior consulted the priests, and it was decided, so that the unfortunate affair might be kept from the knowledge of the students and the house generally, the best course would be for Br. Cyprian to go at once, on the plea of a short holiday, to Fr. Cyprian Tyrer at Standish. And so it was done, the permission of the Prior and President being presumed. We do not know why this destination was chosen; but Standish is near Radburn, Br. Cyprian's birthplace, and it is possible that the Tyrers and Hubbersteys were friends, if not relations.

Son James married Anne Thurgood in London in 1920. They had a daughter Diana who married a Norman King around 1947 and emigrated to Australia. Son Robert married Margaret Waterhouse. They had one child, Peter. Peter's children are living Hubbersteys, thereby bringing this link to the present. There is a very interesting article on-line about Robert Hubberstey, written by his grandson. The link to the article is here, and below is a small snippet.

Robert Hubberstey at the age of 26 with his younger brother James aged just 17 joined up on the same day in 1914 as part of the "first hundred thousand" volunteers after the start of the war. By this time both their parents were dead, their father in 1900 and their mother in 1909.

The other children of Cicely and Robert do not appear to have married although there are some question marks.

The first question mark is James. After the 1851 census there is no record of his whereabouts.

The second question mark is a possible son, John (b.1819). Although there is no birth record that I can find, we do have a John Hubberstey, born in Brindle, marrying Alice Lucas. They had a number of children with one of them, Catherine (b.1846) listed in the 1861 census at the home of Robert in Brindle as a niece. This of course implies that John was Robert's brother.

In 1881 William married Isabella Sandwell and by the 1901 census they had 2 children, Eleanor and Alice. Brother James was also living with them. In the 1911 census we have William still living with his 2 daughters and brother James.

Also in the 1881 census we have a John Hubberstey, born Cottam, born 1856ish, living with a Robert Adamson and his wife Mary. John is listed as a cousin of Robert Adamson. With a little digging it appears that Robert was the son of John Adamson and Mary Hubberstey (married 1833), and that Mary was a daughter of Robert and Cicely (born 1809).

It appears that John married as in the 1891 census he is listed as married to Jossie from Scotland. But that is the last entry I can find for him or Jossie.
Posted by GreeneTimes at 8:04 AM