Links to the USA

In this post we will try to see where the "USA" Hubbersteys came from. We actually have at least 4 distinct cases to look at. For now I am leaving this post pretty much as it was on the old blog as it has been rewritten a couple of times already.

The first case begins with an entry here with the arrival of John Hubberstey on the SS Caronia Liverpool, via , to , 30 October 1910

Looking backwards into John's past: 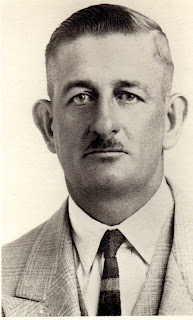 From the 1901 census we have a John and Kate Hubberstey residing in , with a son John Joseph (pictured left), then aged 15 (so 25 by 1910). John Joseph had 5 other siblings. His father John was a confectionery shop keeper and his mother a baker. His oldest brother Robert was a beer traveller (I'm not sure what that entailed, but it sounds good to me).

John Joseph's father, John, had married a Catherine Lunt in 1876. In the 1881 census he was listed as a master ironmonger, having come from Clitheroe, though by then residing in .

John was the son of Ann Barton and Robert Hubberstey. They married in 1846 and had at least 3 children (James, John, and Catherine). Robert (b. Oct 17, 1820?) appears to have been the son of Anne Swarbrick and James Hubberstey. (James was a son of Robert and Mary Watson) 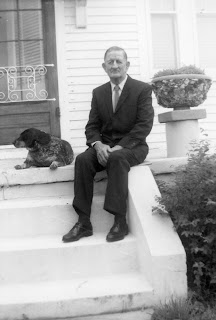 From the quote above we can see that John was heading for . We know from US Social Security records that he died November 1970 in .

The Missouri marriage records show John J. Hubberstey marrying Bertha F. Link (b. Oct 1, 1889). Bertha was his first wife which ties in with his being listed as a Canadian soldier in WWI, with a wife Bertha. In fact, John served with the Canadian Cavalry in WW1 (see attestation paper - here), and was at some point stationed in Hamilton, Ontario. There is a death notice for a Bertha Hubberstey (nee Calvert) in St. Louis for November 19, 1918. There is also a copy of the death certificate for a Dollie Hubberstey who died from typhoid fever. So it looks like Bertha went by the name Dollie. But in the same cemetery there is also the listing for a Serina Hubberstey (aged 6) who died just one month after Dollie. So it appears that John J. Hubberstey and Dollie had had a daughter Serina, who one must suspect may also have died of typhoid fever. (link here)

It looks like John was living in St. Louis at the time of the 1920 census where he is listed as widowed and being a clerk in a hotel. Interestingly he lists his birthplace as Canada and his parents as Canadian. Not sure why he would have done that.

John Joseph lived variously in Kansas, Missouri, and Oklahoma. At some point he owned a ranch with horses at Marland, Oklahoma, the love of horses having continued from his time in the cavalry. He also was for a time in the oil business.

It is interesting that my Dad and my grandfather heard stories from the family about a Hubberstey who had gone to America and done well, even having a ranch with horses where you could ride all day!

Case #2:
This case took a bit longer to track down, but I think we now have a more complete story.
We will use as our starting point the California Death record of James Hubberstey born Feb 12, 1874 in England who died in L.A. on January 8th, 1944 at the age of 69. The listing shows that his mother's maiden name was "Dolphin". This allows us to identify him as the son of James Hubberstey and Ellen Dolphin ( See John Hubberstey and Alice Bamber for the family story - see James at the bottom of the page)

We know from an ancestry.co.uk posting that James had married an Elizabeth Webster. At the time of the 1901 census they were listed as "Hubberster", which of course is not even a standard variant. Anyway at the time of the census Elizabeth and James were living with Elizabeth's brother (John Webster) and his family in Preston. There were no children listed even though there had been two children born just previous (John b. 1899 and Elizabeth Ellen b.1900)


Thomas Hubberstey was born in England 3-18-1903. Later we have James Hubberstey and Thomas listed in the 1920 US census as living in King, Washington. James is listed as a widower and as a machinist in a shipyard.

So Thomas married first Minnie Cooper and had sons Robert (born Bremerton, WA) and James, then married again to (Vinnette Alden ). There was a son William Alden, who appears to have been adopted. William married Charlene (who died in 1981). Minnie died in Washington state in 1969.

There are a number of current listings for Hubbersteys in California, so it is likely that they are the descendants of Robert, James and/or William.

The 1940 census gives us a bit more information: Thomas G and the family are living at 246 Ventura Street, Pasedena, California. Thomas is listed as having finished 7th grade and working as a Labor Foreman. His income for the year was $605. Minnie was listed as having finished 8th grade, and Thomas's father, James by then 66 was listed as a watchman for a gold mine having income of $210. The children Robert T. (10) and James G (12) were also listed.

Thanks to a head's up from a reader in the US we can also fill in another case of England to America emigration.

From passenger manifests we know that in 1921 a "R. Hubberstey", J. Hubberstey" and "W. Hubberstey" left Liverpool, England for Quebec, Canada. They then crossed at Detroit to move to the USA.

Tracing back was a bit challenging but we knew that W. Hubberstey was Wilfred Hubberstey, son of Richard Hubberstey and Jane (Conner) originally from Scotland. Originally I had not picked up Richard in the 1901 census, but I eventually found him in the 1901 Scottish census under "Hubbershey", living in Glasgow and working as a Reed Maker.

Going back to the files I found that there was a Richard in the 1891 census in Preston, of roughly the same age, also working as a reed maker. This Richard was the son of Elizabeth and Richard mentioned in the post HERE.

There is one more interesting part to this story, with a link to Canada. The WWI Canadian service records show a Charles Conner serving for Canada and listing Jane Hubberstey as next of kin. Charles was Jane's brother (there was a Charles Conner listed as a younger brother of Jane in the 1891 Scottish census). So it looks like Charles may have emigrated to Canada before Jane.

We also know from a comment on the index page of this blog that Wilfred married Veronica McCarthy and had at least one daughter. He also had a brother Charles (d.1961) who had two daughters (Jean and Esther) with his wife Esther Hattie Denner (obituary here). The family had a dairy farm in Florida. Jane died in 1945 and Richard in 1948, both in Florida.


Charles (then 26 and single) is listed on the 1930 census as a boarder living in Duval, Florida

We start with a Florida divorce listing for a William G. Hubbersty and Colleen N. Hubberstey....

It turns out that this instance is related, though distantly, to case 3 above. It looks like William is William Gerald Hubbersty, born May 20th, 1928 in Warrington, Cheshire, England. He looks to have married first a Colleen Wong (from Wisconsin??) and secondly Nella (Bach). William Gerald Hubbersty and Colleen Wong apparently had one daughter, who took her mother's surname after her mother remarried.

This one is bit unusual. I don't have access to the journal so for now I can't follow it up...but it does look interesting.

Margaret Hubbersty alias Holland, was the owner of a plantation in Maryland. She was a recusant who, during the Civil War in England, assigned her property to her brother-in-law, a Member of Parliament, to save it from confiscation: see C10/97/55, Hubbersty v. Bell, also C9/27/83. (National Genealogical Society Quarterly Vol. 66, No.3, p.221 (Sept. 1978);

We still have one other Social Security record that need sorting out:

Genevieve (b. March 31, 1916, d. Jan 20, 2000) in California so possibly related to case 2 above. We know that Genevieve was Genieveve Clohe JORDAN and that she was born in Texas and that she married a Hubberstey (Robert or James above???). (But another record shows her born Pendennis, KS). It appears that Genevieve was the wife of Robert Thomas, though that is still to confirm.
Posted by GreeneTimes at 7:23 PM