I originally thought that I had figured out all of the Hubberstey connections to Canada, but I recently found out that there were in fact more connections than I had thought (thanks Dave). While these did not lead to more current Hubbersteys in Canada they do seem to show possible links between lines "way back then".

We start with Thomas Hubberstey who married Barbara Hawksworth in 1801. Thomas was a son of Robert Hubberstey and Mary Watson (so the Hubberstey/Culcheth line). Two of Thomas and Barbara's sons were Thomas (b. 1808) and John (b.1811).

Case 1:
Thomas married Ann Postlewhite (spelling varies). Their third son was Robert (b.1842) who married Elizabeth Kershaw. They had 5 children including a son Thomas William (b. 1872) who married Margaret Berry in 1896. Their son John Robert (b.1899) married Dorthy Pemberton in 1922. They lived in Bolton and had two children, Bryan and Dorothy. Bryan became an architect and in 1957 married Marguerite Hafner from a small village in Switzerland. Early in 1958 they moved to Montreal, Canada where they had three children.

Case 2:
Thomas and Ann (see above) also had a son Thomas (b.1840) who married Julia Rabbitt from Ireland in 1866. They had 5 children including daughters Catherine (b.1870) and Rose (b.1880). It appears that both of these daughters emigrated to Toronto Canada in 1923. Their landing documents are reproduced below. 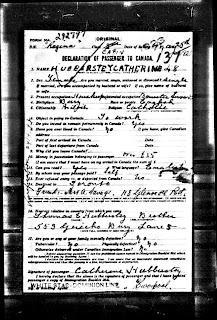 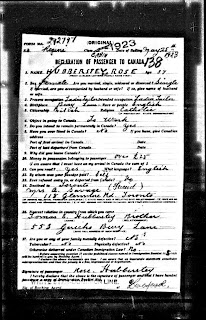 There is also a voter list record for a C. Hubberstey in 1940 in Toronto.

Case 3:
John married Mary Bradley in 1838 and one of their sons, Robert (b.1852), married Margaret Ann Wilson in 1877.  They also had a son Robert who moved to Fernie, BC (Canada) and married Christina Dinsdale in 1909. They had two sons and a daughter. 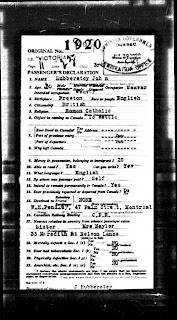 From the John Hubberstey/Alice Bamber line we start with son James (b.1829) who married Ellen Dolphin and had a son John (b.1853) who married Mary Banks. Among their children were a daughter Elizabeth Ellen (b. 1875) who married a George Naylor, and a son John (b.1890).   From the document below we see that John moved to Montreal, Canada  in 1920, listing his sister as his relative in the UK. For his address in Canada he listed a W.H. Pendley of 47 Palm Street, Montreal.

From John in the UK we now know that John lived in Montreal until his death around 1972. His sister Alice (b.1885) also moved to Canada. (For photos of John please see the John Hubberstey/Alice Bamber page). There is a voter list record for a Jack Hubberstey (1940) , a Constable, living at 721 Notre Dame West in Montreal. There is another record in 1957, this time with Jack living at 932 Rue Laporte, and listed as Ordonnance.

James Hubberstey and Ellen Dolphin also had a son William (b. 1857) who married Ann Shuttleworth. Among their children was a daughter Theresa (b. 1883). Theresa married a William Walmsley in 1906. We don't know when she moved to Canada but we do know of the birth of a child William Gerard Walmsley around 1908 in Wentworth (Hamilton), Ontario.

So for this case we have 2 cousins moving to Canada at slightly different times. The birth in Hamilton is interesting because in the early 1920's there was another Hubberstey connection that passed through there on their way to Florida as well as one more connection from a John Hubberstey that lived in the US but in WW1 spent some time in Hamilton.

Case 5:
This case is also from the Hubberstey/Culcheth line and starts with James Hubberstey, son of Robert Hubberstey and Mary Watson. James married Anne Swarbrick and they had a son Robert (b.1820). Robert married Ann Barton. They had seven children including a son James (b.1848). James married twice and had a daughter Susannah (b.1877) by his second wife, Ann Copple.  Susannah appears to have moved to Ontario, Canada and married Ralph Thomas Webster.

Canadian government records show a Catherine Hubberstey immigrating to Canada in 1927 at the age of 59. Based on the age it appears that this may be the same Catherine as in case 2 above, though why one would immigrate twice is an interesting question.

Case 7:
The final case is quite sketchy and involves a Henry Hubberstey leaving Canada (from Winnipeg) for the US in 1906.  Henry was a cousin of Richard Hubberstey (married Jane Connor) who we see in the USA section.
Posted by GreeneTimes at 12:30 PM