Thomas married Alice Taberner and together they had quite a few children. In the 1841 census they are listed under "Habbarstay", but in the 1851 census they were back to Hubberstey. In the 1851 census they were living at Hill Top, Haighton (the image above labelled  Hill Top Farm which may be where they lived - I may have to go and check it out!) where Thomas was a farmer with 73 acres employing 3 labourers. Thomas is listed as having been born in Broughton and Alice in Preston. 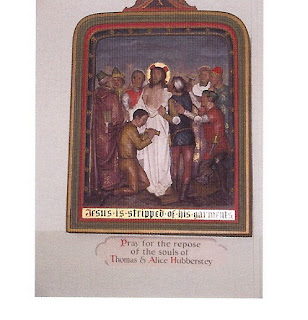 As I mentioned, children were plentiful. In the 1851 census, 12 were listed (John, Henry, Elizabeth, George, Joseph, Robert, James, Isabella, Ann, Thomas, Peter, and Richard). That's as good a reason as any to give this family its own post.

By the 1881 census Alice was a widow and living with Joseph, Robert, Isabella and Ann at Fernhalgh Road, Mitts (Nutts?) Houses, Fulwood. Robert died in 1882, age 44.

By the 1901 census we have Annie and Isabella still living at Nutts Houses, Fulwood, both unmarried. What is quite interesting though is that they are living right next door to James and Ann Hubberstey and their son Robert (at Tan Pit Farm) who we saw in the Samlesbury post. It is Robert (descendant of William Hubberstey and Deborah Whittle) who ends up at Sorbose House later on. Maybe there is some connection here that I can't see yet between these lines of Hubbersteys.

Elizabeth (B.1831): Elizabeth Hubberstey married a Joseph Kitchen in 1855. In the 1861 census Elizabeth and John Kitchen had 3 children (Alice, Mary and Thomas) and an additional son, John Kitchen (age 1) was listed as a grandson at Alice and Thomas' residence.

John (b.1829): John looks to have married Jane Roberts in Blackburn in 1861. In the 1881 census he was listed as a farm laborer at Walley Banks, Little Harwood. There do not appear to have been any children.

Thomas (b.1843): Thomas married a Jane Melling Wright in 1874. By the 1901 census he was a widower with two sons, John Joseph (b. 1875) and James Thomas (b.1877). There are death records for both a John Joseph Hubberstey born 1875, died 1912 and a James T. Hubberstey born 1878, died 1912. It looks possible that John Joseph married Florence Brady (although my records also show Bibby). What is interesting bhere is that Florence in 1922 inherited money from her father George Brady, a well know scientist.

Henry (b.1830): At the 1861 census, Henry (then 31) was working as a coachman at Haighton New House for the Anderton household (Landed Proprietors). By the 1881 census he was living at Gerrard Hall Cottage (either part of or next door to Haighton House) with wife Helen (b.1851) and sons Joseph (b.1880) and Henry Francis (b.1876). It looks like Henry married Catherine Hannah Kay in 1874 (possibly died 1877 - as a Mary Frances was also born at that time, and apparently did not survive) and then married Ellen Holiday in 1879. This is supported by the presence of a Mary Kay at the time of the 1881 census.

By the 1901 census only Henry Francis is listed (as a builder's labourer at St Anne on the Sea). The other members are nowhere to be found, however we do find a Henry Hubberstey age 73 that dies in 1902 (close age match). Later on, in 1910 there is a marriage of a Henry Francis to a Ann Kelly in Old Flyde.

By 1901, Elizabeth was a widow. She lived with Rose Alice (cotton weaver), Henry (errand boy), and Ignoralius (Ignatius?). Ignatius (age 3) is listed as a grandson, and the mother listed on the birth registration is "Hubberstey" implying that he was illegitimate. There was also a 4 year-old Richard Nutall (grandson) living with them likely the son of Ellen Frances who married Thomas Nuttall in 1896.

Ignatius was the son of Rose Alice. She also had another son, William Patrick, before marrying Thomas McCann. Both of these sons took the Hubbersty surname and are the lines for all current day Hubberstys. (more info here)

Son Richard William married Jane Conner from Glasgow, Scotland. They emigrated to the US (Florida) in 1921 with their son Wilfred and had another son Charles. They were actually listed on the Scottish census of 1901 under Hubbershey. It looks like, according to the passenger manifest on their emigration that prior to leaving they lived at 6 chimney Farm, Chimney Farm Road in Cheltenham. There is more about this street and the farm on it here: https://cheltonia.wordpress.com/tag/six-chimney-lane/ . Both Wilfrid and Charles eventually married in the US and had families.

Son Thomas married Sophia Noblett in 1899. Both are listed in the 1901 census, living at the Hampton Inn in Preston, where Sophia was a waitress and Thomas a warehouseman. 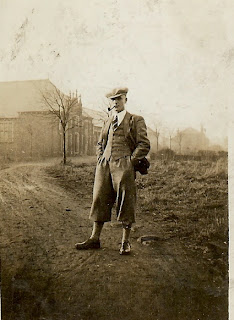 Son Henry married Elizabeth Alice Eastham. They had two children, Kathleen (b.1912) and Reginald Henry (b.1910). Henry is pictured at left circa 1937 (photo courtesy of a reader of this blog).

Posted by GreeneTimes at 7:22 PM